Book The Trip And Enjoy season

The kerala backwaters are a chain of brackish lagoons and lakes lying parallel to the arabian sea coast (known as the malabar coast) of kerala state in southern india. The network includes five large lakes linked by canals, both manmade and natural, fed by 38 rivers, and extending virtually half the length of kerala state. The backwaters were formed by the action of waves and shore currents creating low barrier islands across the mouths of the many rivers flowing down from the western ghats range. The kerala backwaters are a network of interconnected canals, rivers, lakes and inlets, a labyrinthine system formed by more than 900 km of waterways, and sometimes compared to the american bayou.[1] in the midst of this landscape there are a number of towns and cities, which serve as the starting and end points of backwater cruises.[2] national waterway no. 3 from kollam to kottapuram, covers a distance of 205 km and runs almost parallel to the coast line of southern kerala facilitating both cargo movement and backwater tourism.

The backwaters have a unique ecosystem - freshwater from the rivers meets the seawater from the arabian sea. In certain areas, such as the vembanad kayal, where a barrage has been built near kumarakom, salt water from the sea is prevented from entering the deep inside, keeping the fresh water intact. Such fresh water is extensively used for irrigation purposes.

Many unique species of aquatic life including crabs, frogs and mudskippers, water birds such as terns, kingfishers, darters and cormorants, and animals such as otters and turtles live in and alongside the backwaters. Palm trees, pandanus shrubs, various leafy plants and bushes grow alongside the backwaters, providing a green hue to the surrounding landscape.

Vembanad kayal is the largest of the lakes, covering an area of 200 km², and bordered by alappuzha (alleppey), kottayam, and ernakulam districts. The port of kochi (cochin) is located at the lake's outlet to the arabian sea. Alleppey, "venice of the east", has a large network of canals that meander through the town. Vembanad is india's longest lake.

With the Kuttanad region and the Vembanad Kayal nearby, Alappuzha attracts tourists throughout the year. The criss-crossing canals in the area evoke comparisons with Venice, but the differences are also substantial. Each has an identity of its own. Amongst the notable sights is the palm covered Pathiramanal Island in Vembanad Kayal, one hour by boat from Alappuzha. The place is famous for the snake boat races and also has a number of historic colonial buildings and a beach. Kollam and Alappuzha connected to a beautiful lake named Kayamkulam Lake. Now newly started a major snake boat race in Kayamkulam basis.Kayamkulam town and National Thermal Power Plant are located in the banks of Kayamkulam Lake.

Alleppey situated in south of Cochin, is the centre for backwater cruises in Kerala. It has a large network of canals which passes through the town, provices its lifeline & has a long sandy beach. It is also the centre of the famous coir products of Kerala. Nehru Trophy Boat Race - the most colourful snake-boat race in Kerala - is held here on the second Saturday of August every year.

Best Season : October to May. 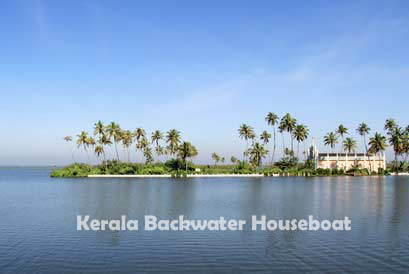 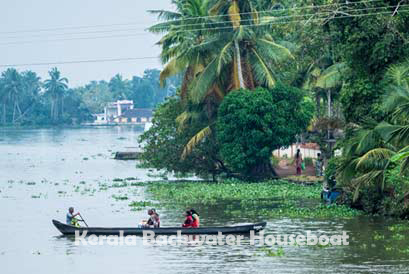 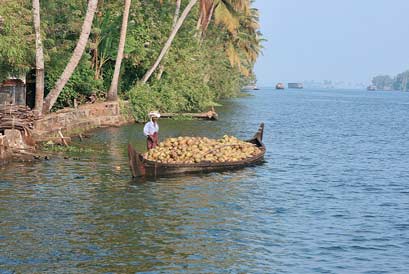 Kollam, previously known as Quilon, is an enchanting backwater destination of Kerala. Located at 70 km from the capital Thiruvananthapuram, Kollam is a picturesque coastal district and a famous ancient port town of Kerala. Kollam is known for its exceptionally beautiful backwaters, lush tropical vegetations and the famous Ashtamudi Lake, which covers over 30% area of this historic town of Kerala. Also known for its world-renowned cashew industry, Kollam is referred to as the gateway to Kerala backwaters. Kollam also has some interesting historic monuments and beautiful temples built in the traditional ornate architectural style. Kollam backwaters attract thousands of tourists from all over the world, who visit the place to discover the hidden beauties of Kerala backwaters. Visit Kerala and enjoy an exciting Kollam Backwaters Tour with Kerala Backwaters and experience the nature at its very best. The beautiful and serene backwaters of Kollam, which extend from the Ashtamudi Lake, offer a perfect destination to enjoy a luxury houseboat cruising. Enjoy a houseboat cruise on Kollam backwaters and explore the breathtaking beauties of lush green surroundings and the fascinating countryside of Kerala. Sail along on a houseboat and pass through lush surroundings enjoying an exotic fragrance strewing in the air all over the area. See a variety of colorful water birds and wildlife on the edges of the waterways and smile as children waves at you as you pass by. Hear the soothing sound of rippling water as you sail along on a houseboat through the backwaters of Kollam and enjoy eating freshly cooked spicy cuisine of Kerala on board the houseboat. See exotic birds flying in the clear blue sky, flocks of graceful ducks calling from the banks and lotuses and water lilies floating all around your houseboat. Visit Kerala and enjoy a memorable Kollam backwaters tour with Kerala Backwaters and get rewarded with a lifetime experience. On Kollam backwaters tour with Kerala Backwaters, you can also visit the famous tourist attractions of Kollam. Visit the famous Mata Amrithanandamayi Ashram, the ruins of the 18th century Portuguese Fort at Thangasseri and 144-ft high lighthouse near Kollam. Visit Kerala and take a Kollam backwaters tour to discover the very best of Kerala- the "God's Own Country".

The Kuttanad region is a vast area of partly reclaimed land, covered with bright green paddy fields, separated by dikes. The level of water is a few feet higher than the level of the surrounding land. It is an amazing labyrinth of shimmering waterways composed of lakes, canals, rivers and rivulets. Lined with dense tropical greenery, it offers a glimpse into rural life-styles of Kerala. Kuttanad is a backwater paradise and an ideal destination for a backwater cruise in Kerala. It is possible to drift along in a houseboat and enjoy the scenic view of the Kerala countryside.

The village of Kumarakom is a cluster of little islands on the Vembanad Kayal, and is part of the Kuttanad region. The blue backwaters of Vembanad Kayal and the amazing shades of green of the vegetation, combines with the quietness of the place to make it an idyllic holiday destination. Many of the resorts also offer ayurvedic treatment While Kuttanad is ideal for a house boat cruise, the resorts are the main attraction in Kumarakonam. One can also take a boat trip in Kumaramonam It is located 15 km west of Kottayam. The bird sanctuary and the drift Srinivas, a singer summed up: "Imagine opening your eyes every morning to a sheet of still, blue water and majestic palm tress gently swaying in the breeze. To define the feeling in one sentence: Nature undisturbed by man is wonderful and inspiring, and Kumarakom is just that!"